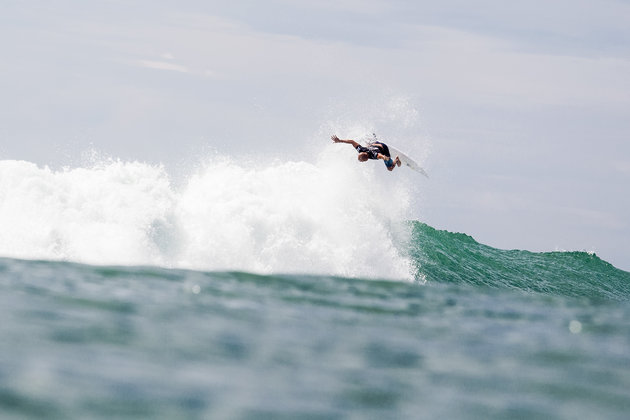 The Surfing world has just gone into melt down this week after 11 times World Surfing Champion Kelly Slater was awarded a 4.17 score for one of the most mind blowing maneuvers in our sport’s history!
In what seems like a supernatural ability, Kelly now aged 43, has pushed the surfing boundaries for the last 23 years. He is currently one of the oldest World Tour contenders, however, continues to leave me in absolute awe of his freakish ability!
Competing in the Hurley Pro at Trestles, Kelly took off on his second wave of the round 5 heat and powered across the face. The wave had a long open section and crumbly lip which he used to launched into a back side air. The lip didn’t give him enough forward projection to stay on top of his board but coming down mid air it suddenly fell into place. During the post heat interview Kelly even said “It’s really surprising the board ended up underneath me in the end.” He shared how he landed switch foot slipped to his knees and actually slammed into the board deck nearly breaking his board. Somehow with lightening speed he was back on his feet to continue riding the wave with a series of maneuvers.
Spectators were on their feet instantly and I am certain the millions watching online did as I had done and were quick to hit the rewind button. In a surprising turn of events the World Surf League Judges deemed the maneuver incomplete sending competitor Mick Fanning through to the next round and Kelly heading home.
I’m certainly no World Surf League Judge but that was one of the most progressive maneuvers I have ever seen and perhaps worth a little more than a score of 4.17.

This weekends surf line up is looking pretty gloomy with small swell and a South Easterly blasting through both Friday and Saturday. Sunday looks promising with a dropping wind and 1-2ft waves on both coastlines!