Roxy started surfing at the age of 12, which is widely regarded as being rather late in life. However she very soon started achieving exceptional results throughout her competitive surfing career. Progressing from school champion to club champion and then rapidly progressing to both Provincial and National champion.

Roxy has also been an active administrator in the sport of surfing. She served as a member of the Western Province Surfing Committee as Vice-President and acting President for many years. Roxy is currently involved in running the Western Cape Inter Schools Surfing League.

Roxy’s passion in life is surfing and teaching people to surf. She is inspired by the opportunity of giving back to surfing all she has received from this amazing sport. Roxy founded her Surf School in 2002 with an umbrella on Muizenberg beach in Cape Town and a clear vision of where she wanted to go with the concept. Her dreams became a reality far sooner than she had anticipated. Growing from a dream of teaching forty girls a week quickly turned into 200 girls within the first Programme intake. The umbrella soon gave way for a share of half a hardware store for storage, and later into opening her own Surf School facility, which she aptly named the Roxy Surf Club. With the support of the Roxy Brand, the Roxy Surf Club’s infrastructure continued to improve, culminating in a move into a prominent beachfront building in the famous Surfers Corner of Muizenberg. In 2007 Roxy launched the Roxy and Quiksilver Retail Surf Store as well as further expanding the Surf School component.

Out of the water Roxy has achieved a great deal academically. She has completed an Honours Degree in Psychology and Communication through the University of South Africa (UNISA), building on her initial qualification in Sports Psychology. She is a registered as a Psychological Counsellor with the Health Professions Council of South Africa. Roxy is also a qualified Chef, having studied at the world renowned Silwood Kitchen. Roxy is currently studying for a Degree of
Master of Philosophy in Disability Studies at the Department of Health and Rehabilitation Sciences of the University of Cape Town. Her research topic is “How children with disabilities in the Western Cape experience participating in a surf therapy programme”.

Roxy has also tried her hand in journalism, writing a weekly column, “Beach Break” for the Friday edition of The Times Newspaper as well as contributing to the development of the editorial pillars of the successful woman’s surfing magazine Salt Water Girl Surf. She went on to become the Regional Editor for Salt Water Girl Surf magazine for the region stretching from Namibia to Jeffreys Bay. 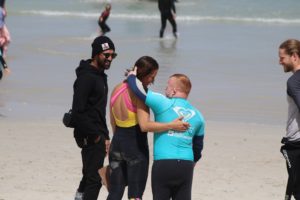