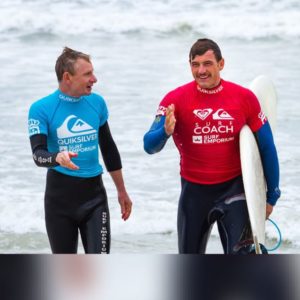 Roxy founded her Surf School in 2002 with an umbrella on Muizenberg beach and a clear vision of where she wanted to go with the concept. Her dreams became a reality far sooner than she had anticipated. Growing from a dream of teaching forty girls a week quickly turned into 200 girls within the first Programme intake. The umbrella soon gave way for a share of half a hardware store for storage, and later into opening her own Surf School facility, which she aptly named the Roxy Surf Club. With the support of the Roxy Brand, the Roxy Surf Club’s infrastructure continued to improve, culminating in a move into a prominent beachfront building in the famous Surfers Corner of Muizenberg. In 2007 Roxy launched the Roxy and Quiksilver Retail Surf Store as well as further expanding the Surf School component.

Today the Surf School and Surf Store continue to go from strength to strength and have amalgamated under the Surf Emporium Brand. The Surf School remains one of the few Surf Schools accredited with Surfing South Africa and works closely with most of the schools within the Western Cape.